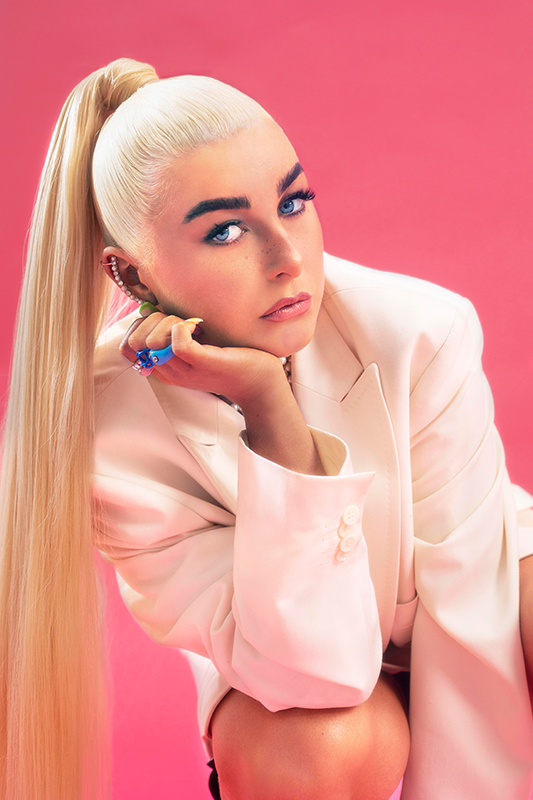 Oh, I would say as its summertime it has to be an apperol spritz, or some very cool funky cocktail, to match the colourful vibe of the video! Maybe a candy inspired one?

I have another single coming up now following after boys Getting Bored: Feels Like is another a girl-power track, but touches even deeper on  how women are treated in our society whilst again empowering us to fight back, and have fun whilst we do it!

After this I am finally dropping my EP “Boring personality Disorder” in the middle of summer! Which will be featuring both singles! The whole EP is based on surviving in this jungle we call the 21st century, especially when it comes to love, dating and being a woman! The EP definitely has a lot of layers to it, and some tracks are what I could say would be a bit more out there than maybe excepted!
There will also be some insane visualisers and artwork together with this EP, so dont worry there’s plenty of crazy visuals once again with the upcoming releases!

I have some exciting shows coming up as well, and the one I am especially excited about is my collab with the amazing fashion brand La Dama Lingerie, where I will be doing an exclusive preview of the EP Live at their official show 2nd July!

I will also be releasing a track called Cracks that is the credit soundtrack for the documentary “No Place Like home”, that just had its premiere at CPH:Dox in Copenhagen and that will be aired on several TV-Channels in Scandinavia from this fall.

Oh, anything magic for sure! Bit of a fun fact about me, but I am a sucker for supernatural shows like Vampire Diaries etc, but Vampires might not be harmless would they, haha! Is it clique to say I wish mermaids and unicorns were real?  But also, if Keanue Reves is in fact immortal, can he share his secret with me please?

My music, just as myself can be very diverse and almost be mix of two polar opposites: Fun and cute, but also dark and edgy if you will! I guess Dolls Kill is a perfect example, especially their shoes! Im a sucker for a crazy pair of statement boots!

I would say all my topics are quite based on empowering and speaking up for the underdogs, in some way or another! Even though my music sonically might be more fun, upbeat and colourful, my lyrics and topics tend to be on the darker side.. It is very important for me that my music relays a message that has a bigger meaning in some sense, wether it being more angled towards being able to affect one individuals journey, or being a voice and pointing out bigger and more global issues I am very passionate about. Ever since I was very young its been very important to me to fight and speak about the things that are unjust in this world. This is definitely something I have brought with me into my music that I want to always keep in its core, but in the light hearted and fun way I am portraying it now!

My songs, especially on the upcoming EP touches on everything from mysoginy, toxic masculinity, gaslighting, the different roles we have in society! It has a modern theme, circling around this day and ages culture of dating, love, and just the lonely and twisted type society we live in today. How difficult it is to find something meaningful in such a use and throw away type of world we have created, how mental health has almost become a trend and an excuse to treat people the way they do and how social media is helping to start relationships just as fast as it ends it. Its about standing up for yourself, admitting what you truly deserve, scream when you need to, and leave when you have to. Ofcourse this is all put together in a fun, colourful and empowering way, that is meant for people for people to claim their power, their kingdom and have fun whilst doing so!

Haha, this might be super silly but I make an insane salad all my friends are obsessed with! So, I guess I have a special talent in salad making? I also make a mean poke bowl! Haha!

I guess singing was there from the beginning, listening and watching mum practicing for all these roles I quickly learnt that I just loved anything that had to do with music. Singing I guess was just something I constantly was doing from very early on, and haven’t stopped doing ever since! When it comes to writing, I think this stems from that I was always writing short stories, even outside of school and homework. I just loved making my own little world, characters and would put up plays at home as well! When I then became a little older I started putting these stories into melodies, and further when my grandma then gave me her piano that has now been in 3 generations I started exploring more and more putting words into the melodies and using my ears to make up the chords. From I was 13 I then started being professionally trainer by Opera singer Olav Naess, where I got trained in breathing and classical technique! This definitely has influenced the way I use my voice, and has given me a unique opportunity to explore my voice and how it works!  I then got trained in jazz from I was 16, which definitely was a turning point I. Many ways and was wlso when I got inspired as a writer by listening to Lana Del Rey, which completely changed my writing style.

If you were ever gone choose a different career path, what would it be?

Definitely something within fashion! Being a stylist and/or an editor for a big fashion magazine, or maybe even a designer. When I watch shows like Bold type for example, I truly imagine myself being the characters in the series!