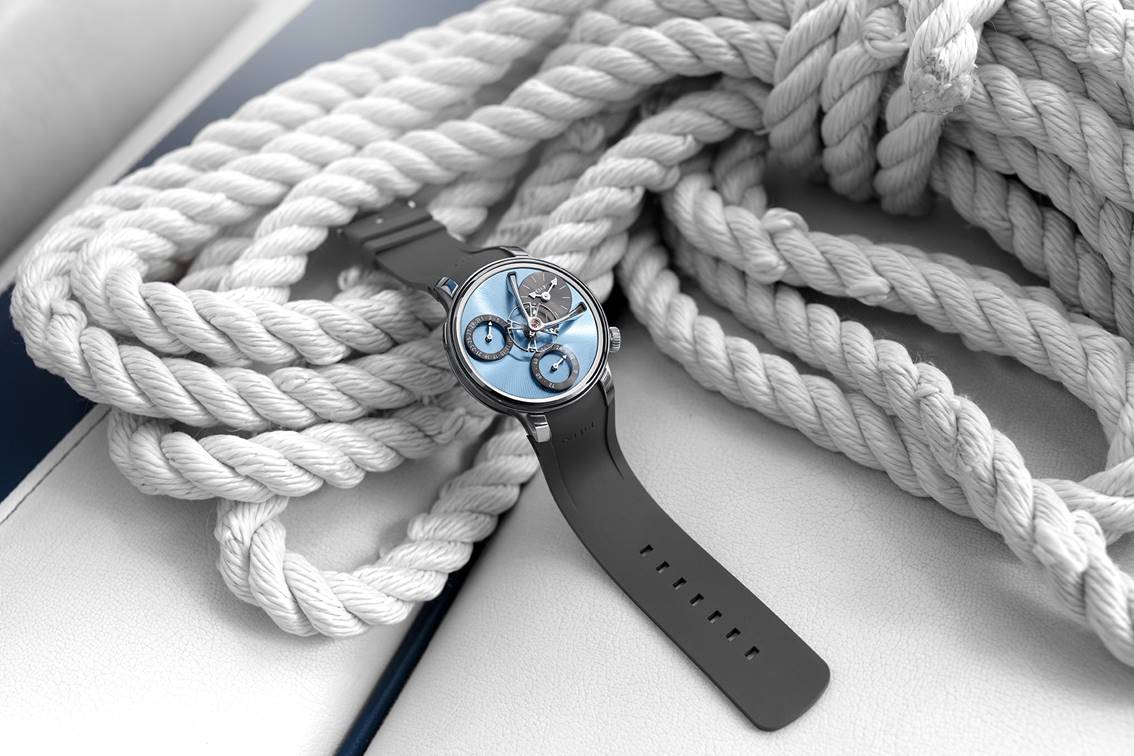 Following the LM Perpetual EVO, the LM Sequential EVO, and the LM Split Escapement EVO (first introduced as a limited edition for the United Arab Emirates’ 50th anniversary), MB&F is now introducing two new EVO editions, proving that EVO is becoming a collection in its own right.

THE STORY OF THE LM SPLIT ESCAPEMENT

Like all good stories, it is worth starting at the very beginning. The idea behind the LM Split Escapement started life in 2015 with the LM Perpetual. Designed and conceived by Northern Irish master watchmaker Stephen McDonnell, there were two criteria for the perpetual calendar: make it fool-proof; and display MB&F’s signature flying balance wheel in the centre of the dial. McDonnell was soon to realise that there was a problem: there was nowhere to put the escapement. The concept had worked with previous Legacy Machines, where the balance wheel was on the front of the watch along with the escapement, but with the perpetual calendar display of the more complex LM Perpetual, there was simply no room for both.

A man of solutions, McDonnell had the ingenious idea of creating the world’s longest balance staff that would traverse the entire movement, leaving the large balance wheel on its own, on the front of the watch, and moving the remaining parts of the escapement – anchor and escape wheel – to the opposite side of the movement, almost 12 mm below; hence the name ‘Split Escapement’.

When the LM Perpetual was unveiled, there were so many innovations to talk about that the split escapement went largely unnoticed. So, in 2017, MB&F decided to create the LM Split Escapement (LM SE) to highlight McDonnell’s genius idea. The manual-winding, 298-component movement is driven by double barrels providing 72 hours of power reserve, and features a user-friendly, foolproof rapid date-changing system that prevents the user from inadvertently damaging the movement when adjusting the date. 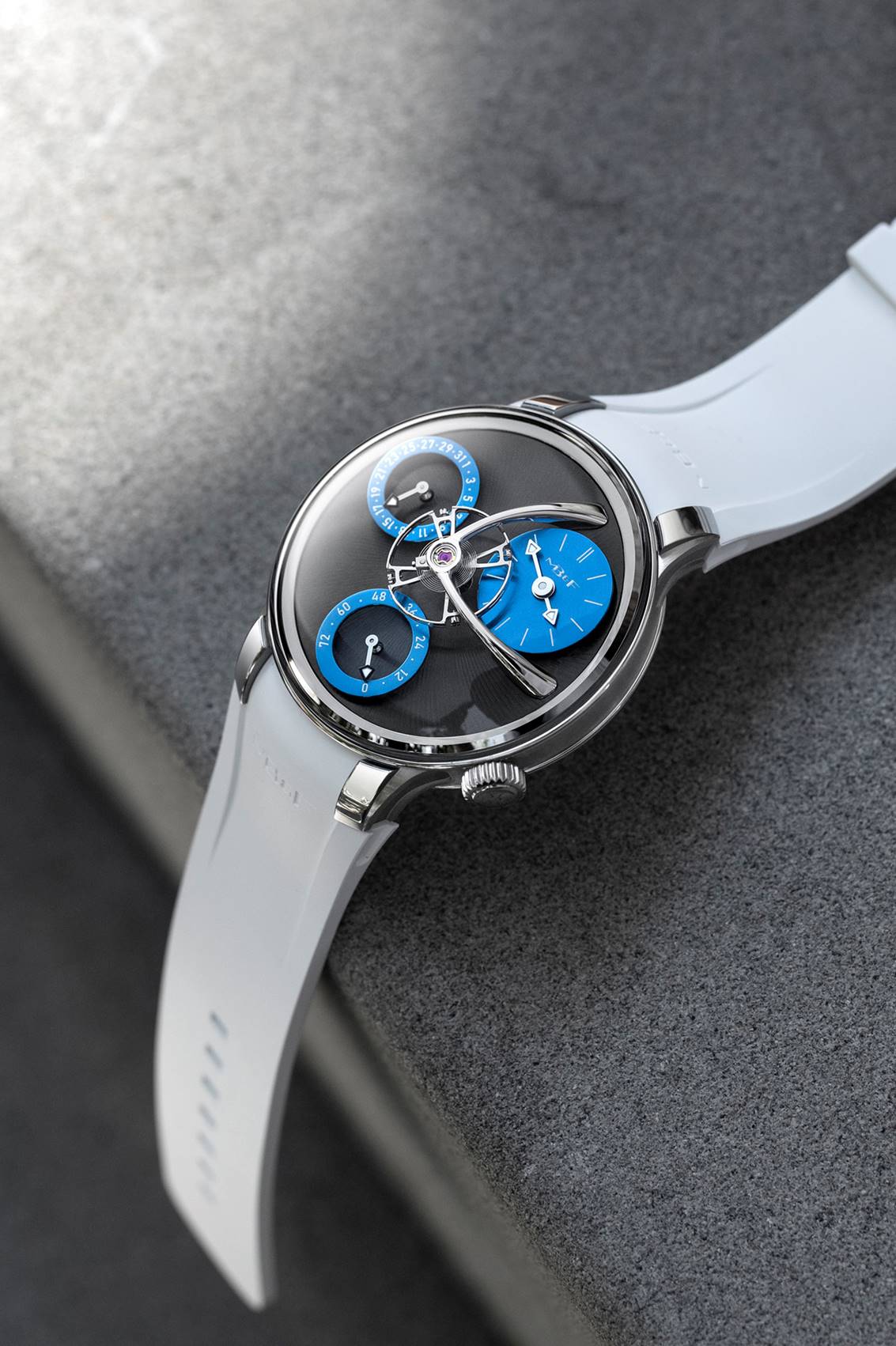 The first editions of the LM Split Escapement were presented in MB&F’s classic Legacy Machine case – but the collection now also features the EVO case, conceived for a more active lifestyle.

This new case design first came to life in 2020 in the form of the LM Perpetual EVO; it features 80 metres of water resistance, a screw-down crown, an integrated rubber strap and a bezel-free design. But the EVO concept goes deeper: inside the case, the movement is suspended thanks to a world-premiere, monobloc shock-absorbing “FlexRing” system, dampening the kind of vertical and horizontal shocks that come with real-life adventures.

After the LM Perpetual EVO, the EVO case worked its way further into the Legacy Machine collection: most recently and with a bang, in the form of MB&F’s first-ever chronograph, the LM Sequential EVO. But previously and more discreetly, with a 10-piece limited edition LM Split Escapement EVO, presented quietly on the occasion of the UAE’s Golden Jubilee.

In addition to the EVO case, that Golden Jubilee edition featured a change that radically modified the design of the LM Split Escapement: the entire mechanism was rotated clockwise by 30 degrees, with the crown at 4:30 instead of 2 o’clock – completely changing the symmetry of the watch, giving it a totally new character. 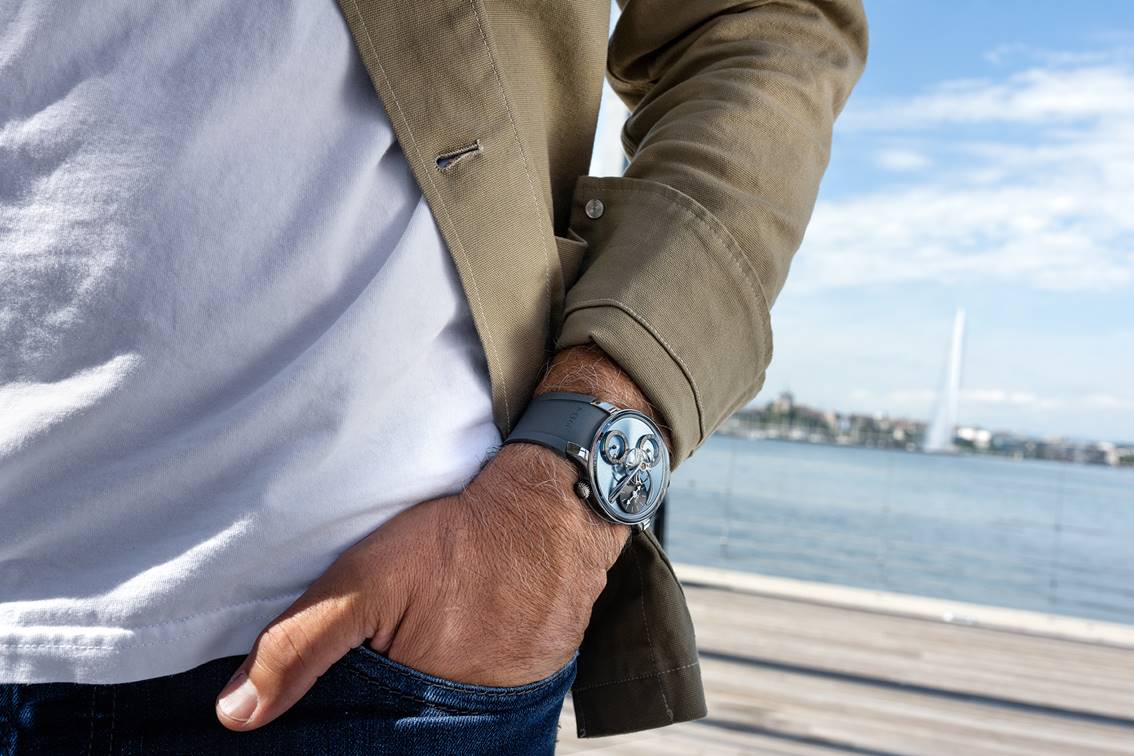 MB&F is now unveiling not one, but two new LM SE EVO editions. The first comes in grade 5 titanium with an icy blue base plate and slate grey dial and opened counters that will make you shiver, in a good way.

Another feature is the special darkened treatment on the movement side, creating heightened contrast between the wheels, the rhodium-plated barrels and the rose gold details – symbolically echoing the contrast between the active, contemporary nature of the EVO collection and the traditional finishing of the movement. MB&F is one of only a handful of artisanal brands that continue to finish components painstakingly by hand, making the view of the movement as mesmerizing as the dial. 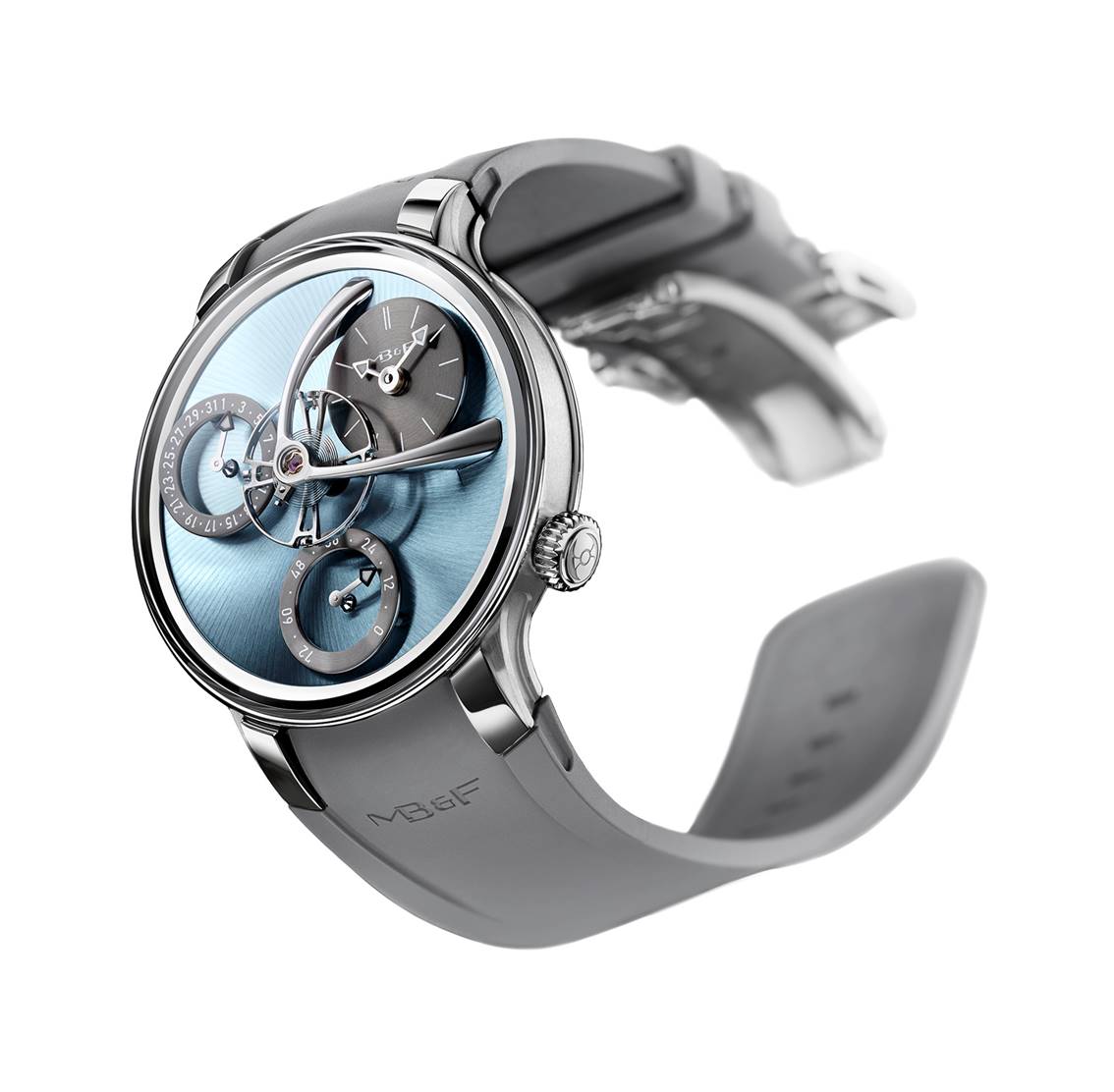 The second edition is the first of a series of limited editions that will be reserved exclusively for the MB&F LABs – a new retail format building on the success of MB&F’s M.A.D.Galleries, combining MB&F timepieces with a limited number of art pieces, but adapted to spaces not quite large enough to host a full-fledged M.A.D.Gallery. This year should see the opening of MB&F LABs in Paris, Singapore and Beverly Hills – with this edition having been designed exclusively for the one on Los Angeles’ Rodeo Drive.

The Beverly Hills MB&F LAB is managed by the renowned American watch retailer Westime, who has not only been a partner of the brand since the very beginning, but is also one of the first to open an MB&F LAB. This new edition of 25 pieces comes in Westime’s corporate colours of blue and black with a striking black base plate and metallic blue dial and open counters. It will be the only MB&F LAB edition released this year. 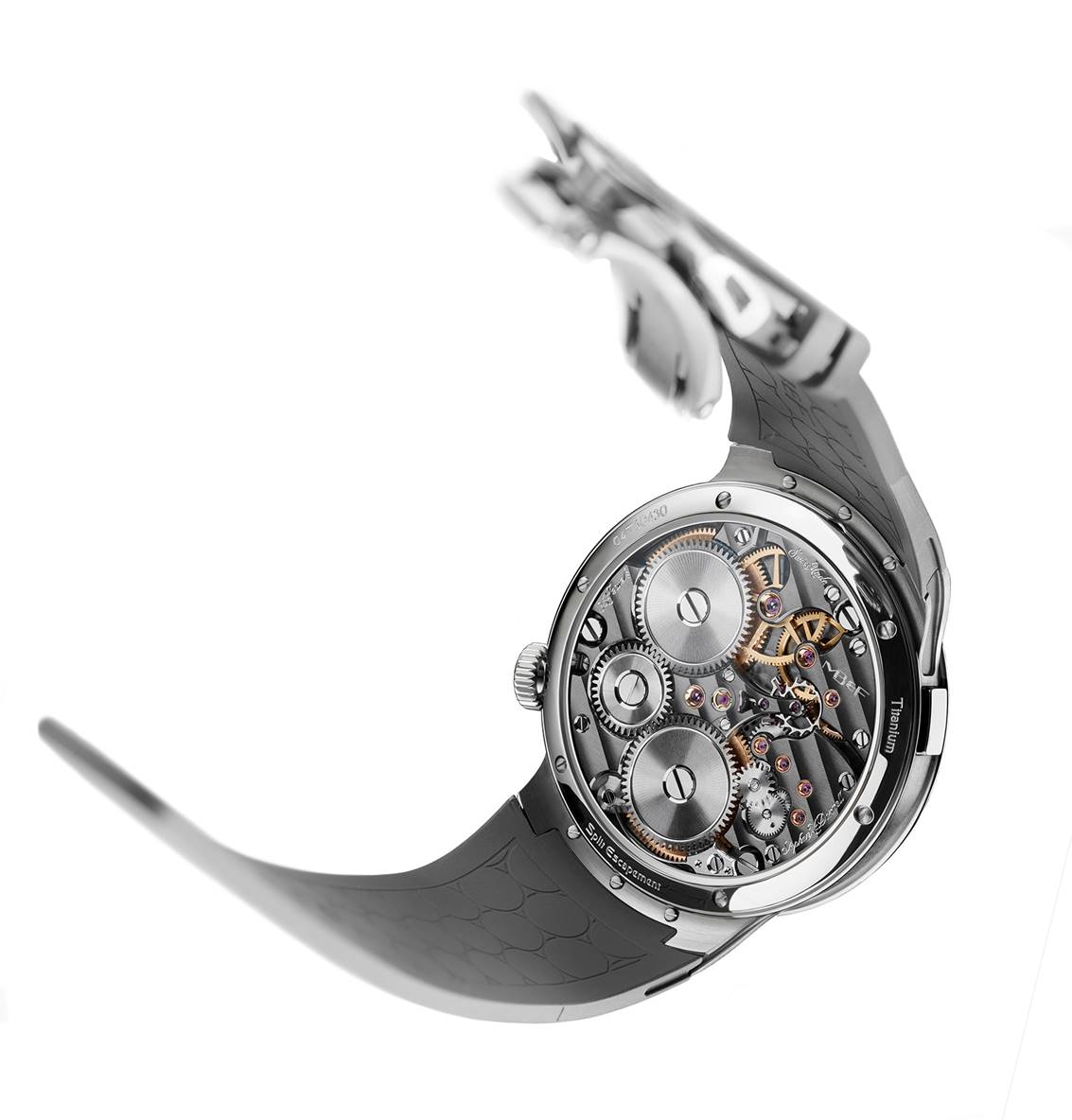