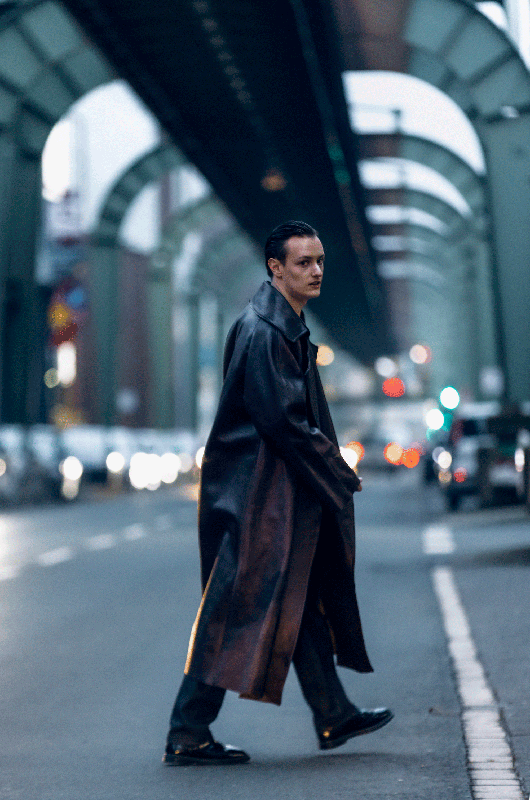 Thank you for having me.

I’m a dutch singer/songwriter/producer and I go by the name of Mereo. Since graduating the Amsterdam Academy for Theatre and Dance I have been developing this character to tell my story in a larger than life kind of way.

The new single is called So Cold. It’s the first introduction to something bigger. I’m working on a new album for sure but only time will tell what that will look like exactly. I want to create a visual universe around the music too.

Whenever I try a new look it has to be something I can move in easily. Movement and dance are very important in my performance. It shouldn’t be too restricting. For the latest shoot I wore a big long leather coat made by Dutch designer Kees Hollander. That coat was pretty heavy to be honest so it took some adjusting to move freely in it. But it looked great.

For this new chapter I’m going for sort of a Blade Runner look. Future meets retro.

My last album was about losing love and finding it back in memory. Being in the past and the present at the same time. It’s very personal. I want to take the listener on a journey with my songs so I try to let them in to my world and show them the way to the light. It can get dark sometimes but there’s always hope. Thats why I love making albums. You can make a progression in the storytelling. A person doesn’t just feel one emotion. There’s a lot going on most of the time and I try to break that down in my music. Life is hard you know. Music can help you escape and face life at the same time.

I studied as an actor but I would actually love to be a director at some point in my life. Music feels more urgent right now. But I can see myself directing a theatre piece in the future.

It’s where I’m free to do what I want. Let go of all the struggles of creating something. It’s all right there. I can just sing my heart out.

My dad is a classical musician so music was always around me growing up. I always sang but I only started taking it seriously when I wrote my first songs. I was about 14 years old. I had lessons from that point on and further developed my voice in my theatre education. It always went hand in hand with songwriting though. I already knew how to play the piano but I learned guitar just so I could write songs on it.

What would a 10 year old version of you think of the music you make today?

I think he listens to Mereo in the back of the car on his walkman. He would probably like some of the slow songs. But I think he wants me to make something a bit funkier to dance to as well.