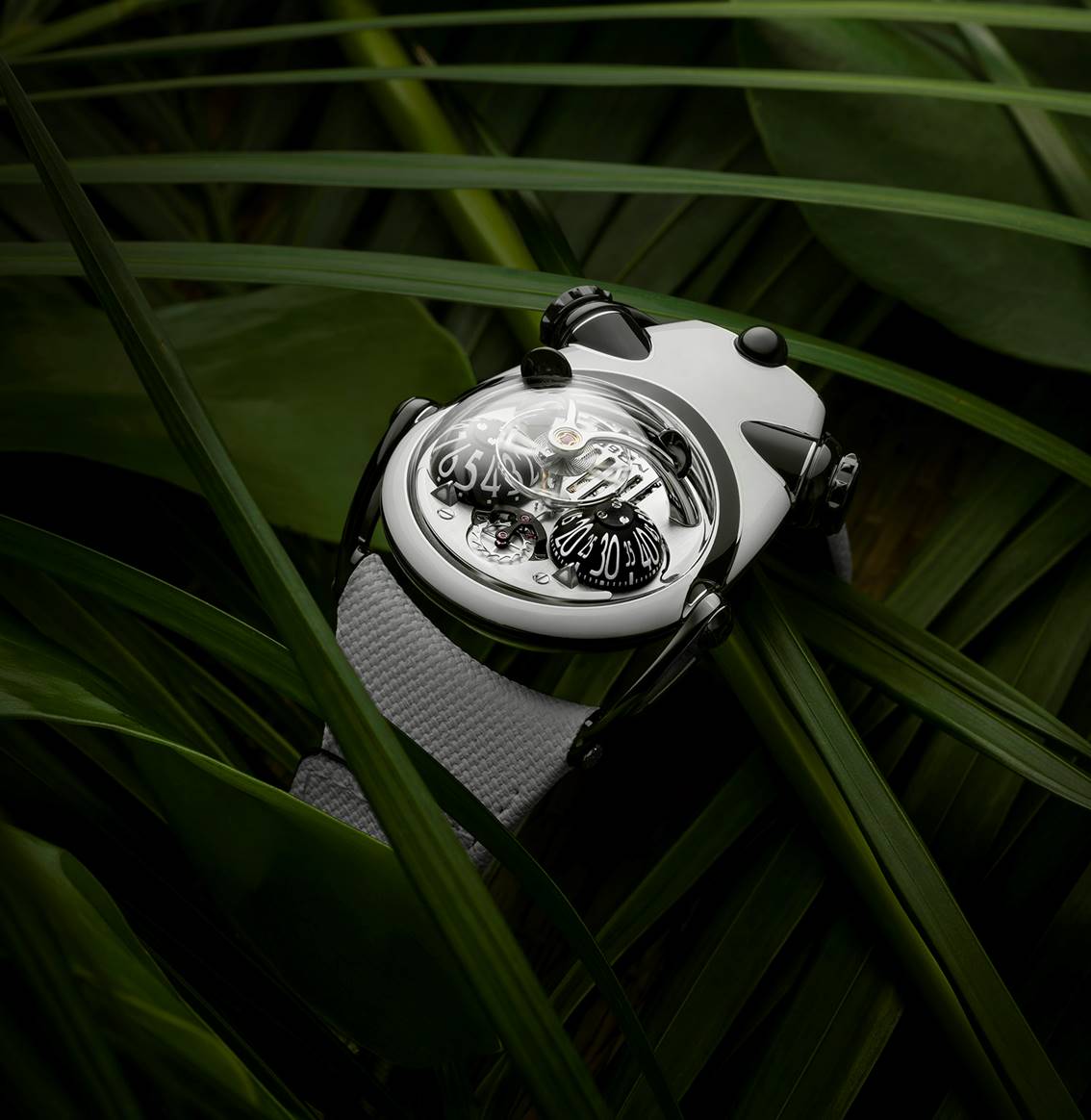 This year marks the ninth edition of Only Watch, a biennial charity auction of one-of-a-kind timepieces where 99 per cent of proceeds go to fund research into Duchenne Muscular Dystrophy, a genetic disorder characterised by progressive muscle degeneration primarily affecting young boys. This is the sixth time MB&F has contributed one of its Machines to Only Watch, once again going above and beyond in the creation of a truly unique timepiece.

“I first met Luc Pettavino (founder and organiser of Only Watch) and his late son Paul in 2005,” shares MB&F Founder Max Büsser. “For me, Only Watch is not a marketing stunt or a feel-good operation; we are intimately linked to the story of Luc, Paul, and all the other kids who suffer from Duchenne Muscular Dystrophy.” 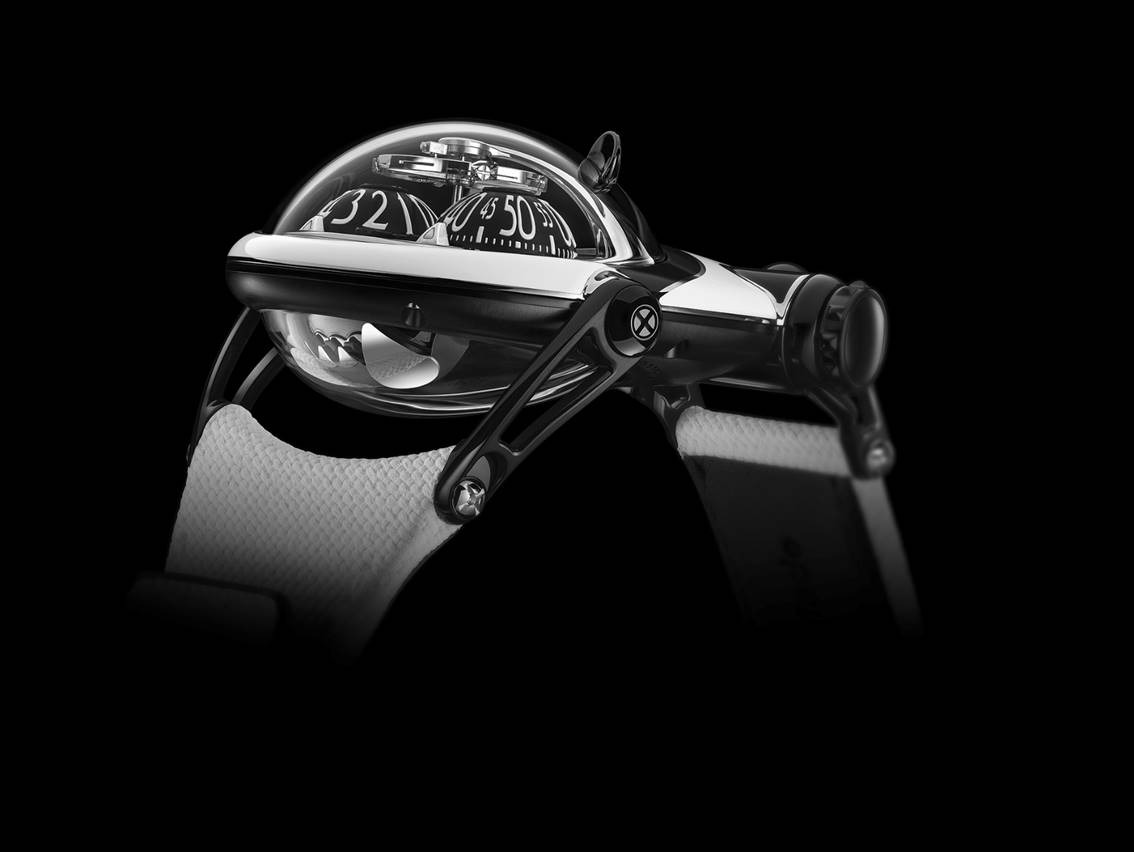 For this edition, MB&F has transformed its Horological Machine No10 – aka HM10 Bulldog – into a panda bear, one of the rarest and cutest of the world’s mammals, much-loved by children and adults alike – including Max, whose first cuddly toy was a panda.

Because pandas are so associated with children, this is unsurprisingly not the first time the panda bear has made an appearance with MB&F and Only Watch. For the fourth edition in 2011, MB&F presented an HM4 in collaboration with Chinese artist Huang Hankang, which featured a miniature panda bear flying atop an HM4 jet.

The base of this new unique piece for Only Watch is Horological Machine N°10 with its rounded, compact body that lends itself perfectly to the shape of the cuddly panda. The top section of the case is coated in black and white lacquer to mimic the animal’s colouring. To accommodate the lacquer, the top section of the standard HM10 titanium case had to be specially crafted for this Pièce Unique in stainless steel. Other unique features include two black titanium panda ears, added atop the sapphire crystal dome, and a rather cute ceramic tail crafted from machined Grade 5 silicon nitride. 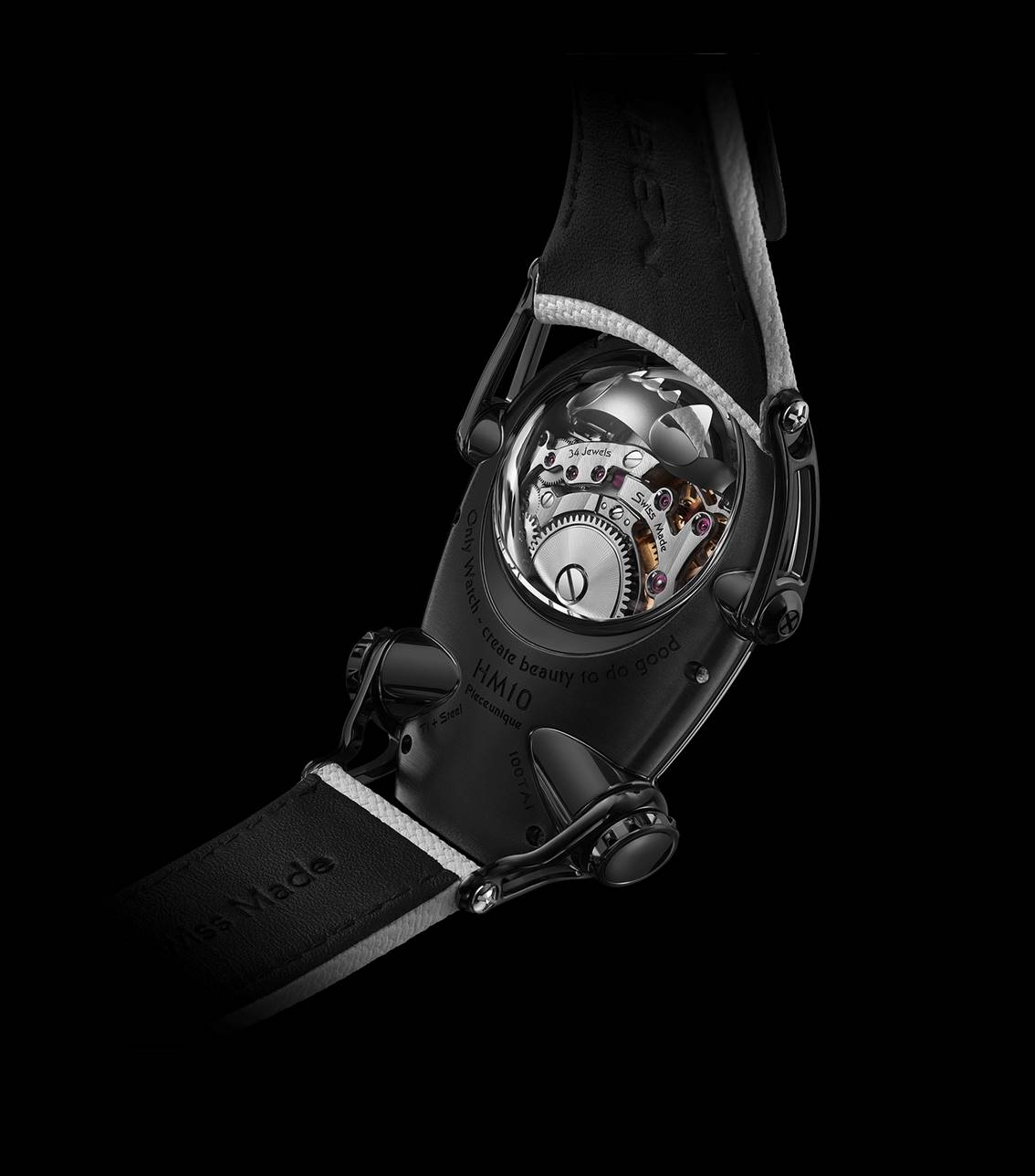 Much like the panda’s unmistakable eyes, two black aluminium time-display domes dominate the face of the watch – a nod to the other use of the word ‘panda’ in the watchmaking world, where white watch dials with black counters are fondly called panda dials. Other panda bear features include stout yet flexible “legs” that wrap firmly around your wrist and those important panda teeth that are constantly munching on bamboo shoots.

The teeth are not only fun but also act as the power reserve indicator. A fully closed mouth tells you that the Panda is wound down and ready for a nap, but if you can clearly see the rows of shining teeth lining the jaws, then it is charged up with 45 hours of mainspring. This three-dimensional power-reserve indication has been carefully designed and calibrated to consume the least energy possible, allowing the timepiece to direct its considerable mainspring torque solely towards its suspended balance and its revolving hour and minute domes. 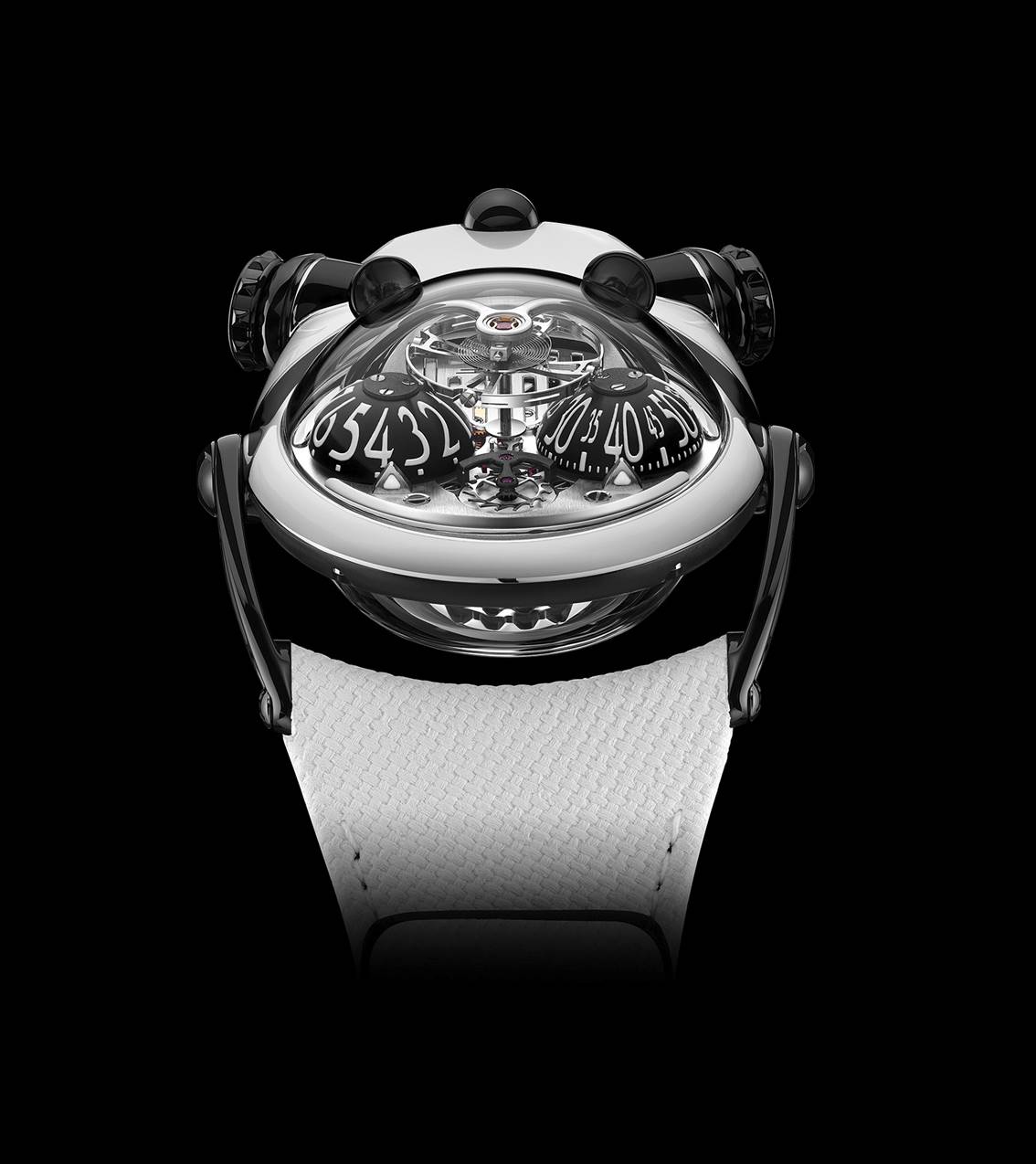 Despite its rotund morphology — measuring 45mm across, 54mm from nose to tail, and with a maximum height of 24mm — the HM10 Panda is surprisingly wearable. Its sprung strap attachment “legs” allow the body to fit closely around the wrist, with a strap that is black on one side and white on the other. This unique piece is powered by the manual-winding engine of the HM10 that was designed and developed in-house, and is one of the rare timepieces where you can see both the heart beating and the brain ticking, making it the perfect calibre to bring the panda to life.

The HM10 Panda is being offered together with unique works of art by multidisciplinary designer Lee Yuen-Rapati – well-known in the watchmaking world as @OneHourWatch on Instagram – who has graciously created a series of illustrations inspired by the HM10 Panda specially for the auction. 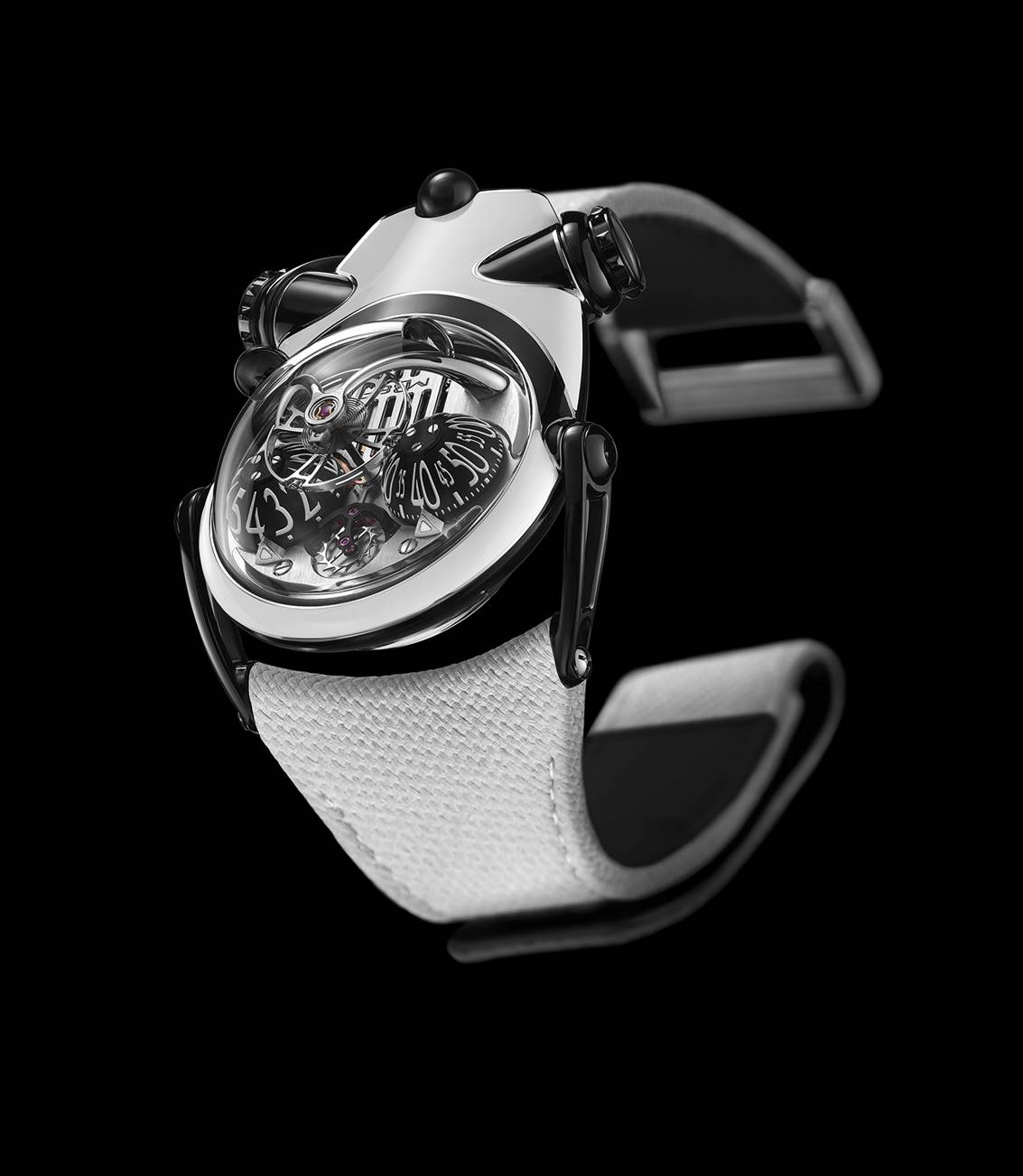