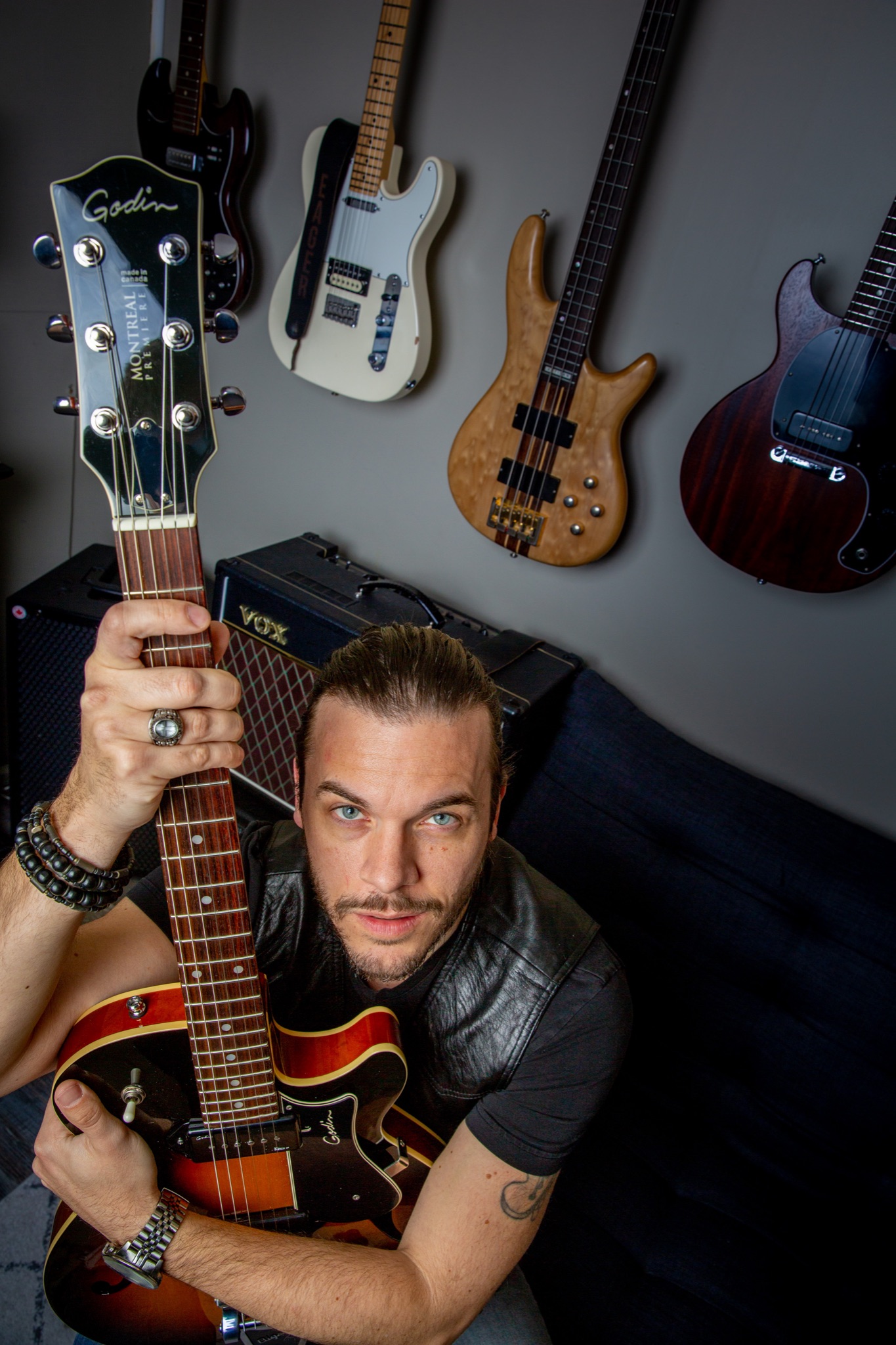 Good question! Well, the new single is a song you can either relax and groove to; or if you want to take a deeper listen, contemplate your life to. It’s probably a classic cocktail song: Negroni, Old Fashioned, any hard alcohol or maybe my current go-to beverage, a gin & tonic. I’d say avoid beer and wine for this tune … I have other songs for that!

Joy is the third single I’ve released in anticipation of my sophomore album. While the first two singles were much more high-energy, classic pop/rock (I Don’t Dance Anymore and For Your Love, released in November 2021); with Joy I decided to lean harder into my R&B influences, the blue-eyed soul with the falsetto vocals, string lines, natural bass, etc.

As for tour dates, this year you can still catch me playing around the Greater Toronto Area – I have several house gigs here (all listed on jeffeagermusic.com). I’ll continue to release new music throughout the year. When the full album arrives in 2023, there will definitely be more original shows, some festivals and some travel.

Well I’m not sure how harmless it’ll be, but I’m ready for aliens. Let’s do this! I’m in. Bring them on. I know that with the vastness of space, billions of stars, there absolutely must be more intelligent life, right? Unfortunately though, it seems to me that the ‚vastness of space‘ is trumped by the ‚vastness of time.‘ The universe is so old, all of these other civilizations, like ours, are a blip in the grand time scale. So while the chances are high there are intelligent alien life forms, the chances that those ETs live in proximity to us in the exact same sliver of time … seems unlikely. Sorry to disappoint.

Bigfoot though … I am sold on that. Too many stories, eye-witness testimonies and so much uncharted Canadian and American woodland. I could make a bet on Bigfoot.

Rock & Roll Chic. I’ve always straddled the line between rock’n’roll and soul. Some days I’m in a suit, some days in ripped jeans and leather. I think you can hear that in my musical catalogue: it’s polished and gritty all at once. I enjoy a little juxtaposition … dressing up more for a very casual gig, or putting some edge to an outfit for a ‚classier‘ gig.

Joy is about that elusive thing we look for in life, but is hard to grasp and hard to hold on to. Even when the circumstances of your life seem to be working out well, you don’t always have joy, or maybe it escapes quickly if there’s a small change in your situation, or sometimes for no reason at all. Joy is an internal struggle song, and I hope listeners will find their own experiences validated here, because it’s a place most of us have been at some point.

Oh, and I love to dress up these bittersweet lyrics in a soulful, funky, easy-to-groove-to song. (That’s one of the things I love most about Freddie Mercury: he had such a way of hiding heart-wrenching lyrics in fun, theatrical pop and rock sing-alongs.)

All of the new material I’m doing now – the singles that are currently out, those to come later this year, and the entire album – is completely honest and authentic. It’s what I need to say at this stage of my life. I Don’t Dance Anymore is literally about dancing carefree in your youth, and getting stiffer and more self-conscious as you get older. For Your Love is a testimonial about marriage – the inherent struggles and the commitment and love that prevails. Other songs that you’ll hear in the coming year: one talks about middle age and how the best is yet to come, and another is dedicated to my kids, but it’s written for them as adults (when they actually might reflect more on what their dad did his whole life!) And yet still, all of these seemingly heavy topics are wrapped up in fun, funky pop and rock hooks and changes.

I can only write what I know about, and my demographic of fans is right there with me; those north of 30 all the way up to 60 or older will find meaning here (and maybe Gen-Z will surprise me, right? If teenagers dig this, too, my humble thanks to you!).

I enjoy math: equations, algebra, calculus … not only was I good at it in school, I liked the logic of it. I enjoyed taking word problems, pulling out all the numbers and working out the solution. Being in the middle of a good equation is like being in the middle of a good book or the middle of a piece of classical music. There will be a day when I won’t want to do music as a full-time job. When that happens, I think I’ll go for a 180-degree turn in my career path and do something away from social media and self-promotion … something with math. (180-degrees, see, there’s some geometry for you)

– I write much of my music away from any instruments, the hooks and themes and concepts often come more freely being away from the keys or a guitar

– Like many artists, I still have a level of discomfort with hearing my own voice and playing recorded, whether it’s in-studio or live video. In those times I have to trust in the track record: I wouldn’t have been hired to sing and play night after night, month after month, for the last 15 years, if it wasn’t kinda sorta good.

– Three goals I try and approach each show or any playing opportunity with: 1) enjoy what you’re doing here, 2) play/sing each line with intention, and 3) make music primarily for non-musicians (the people that will enjoy it most freely without analysis and judgment)

Like many, I started on classical piano in childhood. Like few, I really enjoyed it, and carried it on without parental pressure through my teenage years. I added guitar and bass to my repertoire as a young teenager, and while my friends were all learning grunge and alternative 90s rock … I was eating up Led Zeppelin, Rolling Stones, Queen, Aerosmith, Boston, Clapton, and more. Moving to Toronto in my twenties I began my career working with cover bands cutting my teeth on funk and soul: Earth Wind & Fire, Stevie Wonder, Prince, and James Brown. My ability as a singer really came from studying others – I watched closely what my favourite vocalists in Toronto were doing and slowly got better with tone, pitch, stamina and expression. I have to say, while I sometimes feel stagnant on the instruments I play, I do feel stronger as a singer year after year. It’s inspiring to see the rock legends who can still sing five nights a week in their seventies.

I’m not much of a songwriter, not in terms of volume, anyway. I’m impressed by the artists that can crank out songs every week for years. They write 50 songs for an album and narrow it down to the 10 best. I just don’t work that way. I may have many ideas, but only the very best get to become full songs. I wrote 9 songs for my first album Bonavista in 2014, wrote two more and re-released it all in 2016, then I didn’t write a thing until now. And even with this project, I’ve dedicated myself to 10 wonderful songs and worked them to be the very best.

I’d say there isn’t much left to answer. Thank you, Chris!