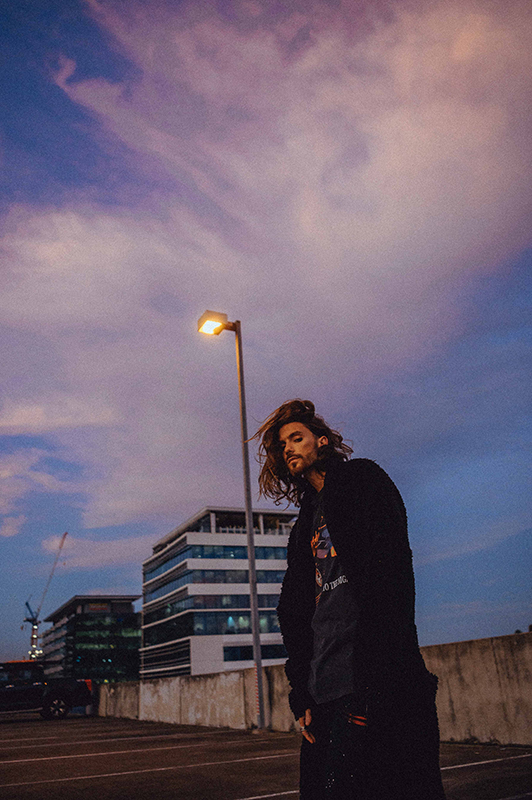 Thank you very much for your time! Before we introduce your new release to our readers – what kind of drink would you recommend to sip on while they listen to your new music?

Hm, let’s go with a Gin with sparkling water & lime, that’s my go-to.

Please give us an update about the new single, new album, tour dates, new videos?!

A new single, two new music videos, & my European/UK tour dates are about to be announced. I’ve also just launched my web3/NFT-focussed media company called Lowly Labs which has an editorial arm, podcast arm & Twitter Spaces show, all while preparing for our second son, who’s arriving early Nov. Life has never been more intense, though it’s also never been so rewarding.

Just like most artists, each song holds a completely different meaning. However the common thread is that I generally write music to help people contemplate an alternate perspective. I neglect the idea of ‘filler songs’. In my opinion, if you’re going to create something you should place every ounce of skill, time, effort & resources into it. Why settle for less? There are millions of songs & videos being released each week. If you aren’t cultivating genuinely meaningful & authentic content, you’ll end up just another creator swept up in the chaos. I often revisit what I want my long-term legacy to be, & that helps me determine my direction.

First & foremost, I’d like to say I’m a great dad. I used to be a State swimmer so I guess I’m still pretty decent at that. I love lifting & bodybuilding culture, & I’m pretty good at rock climbing & surfing!

The only goal I have higher than music is to be a philanthropist.

I always work better alone, co-writes have never been overly comfortable for me.

My writing preference is still acoustic, though that’s shifting to working directly in Pro Tools.

I always have social media in the back of my mind, & am regularly trying to find the balance between marketing, promotion & creativity.

How did you learn to sing / to write / to play?

I’ve just always loved it. Especially writing & singing. Playing instruments has always fallen to the wayside in comparison to those two. My father is an incredible bass player, performer & producer so watching him definitely shaped me into who I am now.

As I’ve gotten older I’ve realized that music, singing & writing are just a means to my actual passion, which is telling stories & conveying meaning. I get the same kick from public speaking, shooting podcasts & promoting content, & that’s exciting as I know I’ll never be pigeonholed into one vocation.

I think more artists need to know what it really means to be a completely independent artist. With no management, record label or industry assistance. It’s unyielding. When you have absolutely no one to rely on, you experience utmost empowerment, with simultaneous despondency. You have to do everything, with no one steering you in any direction, let alone the right one. Your entire career is based on intuition. You make endless mistakes & often wonder whether you’re even capable of what you’re setting out to achieve. It’s brutal, & in reality, arpt from your friends & family, no one cares if you succeed, & no one cares if you fail. You literally don’t exist until you start doing well, & you constantly compare yourself to those who are represented. When you start doing well everyone praises you & pretends they’ve been there all along, though in slower times they all vanish, & I mean everyone.

So, before you decide to take on an artistic career completely solo. Where you run all the meetings, content, editing, playing, singing, songwriting, scheduling, posting, performing, networking, practicing & producing, recognize that you’re about to embark upon the best & worst thing you’ll ever do. Unless you truly believe in yourself, you’ll be thrown off the bull very quickly. I’m lucky that I believe in myself, so I’m still riding it.