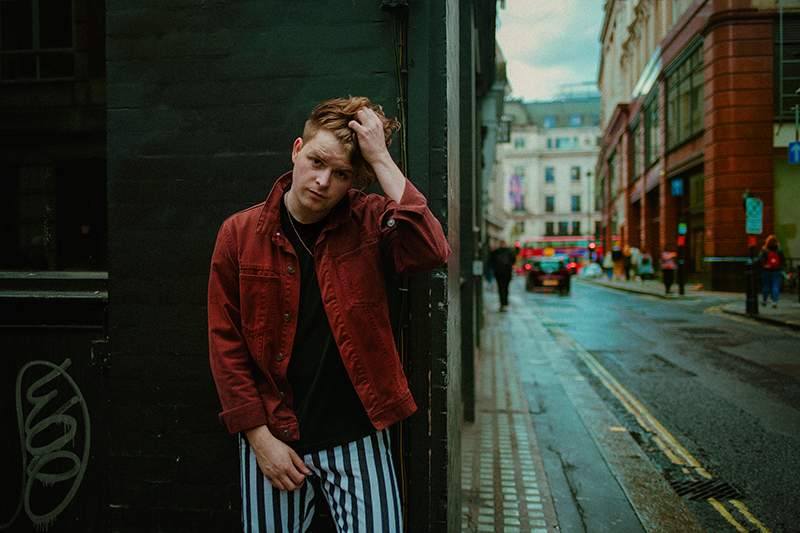 Ooooo great question. If you’re in need of refreshment, grab a peach iced tea but if you’re feeling a like DRINK drink, let’s pop open a bottle of prosecco or something – we’re celebrating my new song after all…

I’ve just put out my new single All My Friends which will be on my next EP and felt like the right track to put out early, especially as an end of summer rock bop. It’s about watching your friends settle down and start families but feeling left behind because you still want to party and live a life without responsibility. I’ve written so many tunes over the past few years, it’s going to be impossible to pick ones for a debut album!

I’m playing two headline shows this month to celebrate the release – London on the 21st of September and Nottingham on the 24th of September. Frustratingly due to Covid, any plans to tour outside of the UK have been delayed but I’m desperate to play all over the continent (and one day the world) so I’m trying my best to be patient.

In terms of videos, the official live session for All My Friends is out on Wednesday! Honestly, shooting it was insanely fun. It’s set in an old school laundrette and I basically spent three minutes dancing around and screaming into a microphone with my band. I can’t wait to release it.

So when I was a kid, I used to go on trips to Scotland a lot and there is a myth of a sea monster that lives in the Loch Ness (a place just South from Inverness) called Nessie. How cool would it be if it was true?? A real life dragon living in a river? I’d visit them every day.

I thought about this one for a while but I think I’d have the create my own brand. I’d call it GRIT and it’d be traditional every day clothes with big old rips all over and re-made into statement clothing. My music is very 90’s/00’s throwback with soaring choruses but done in a new, different way so any fashion style that could mimic that would be the one!

Since I first started writing songs as a teenager, I always used it as a cathartic way to express myself and my feelings even if I didn’t fully understand them properly at the time. I’d class myself as a very positive person so the only way I can really address the negative things in my life is through song-writing hence why releasing music is so important to me.

My message is quite simple – be who you are, trust your gut and know that my songs can be the soundtrack to the good and the bad times along the way. I spent years denying who I was and it only ever made me lonely.

My best friend calls me the dog whisperer with golden retrievers so I’m going to go ahead and class that as a special talent. It might be because I have super blonde hair so they think I’m one of them but honestly, if I could, I’d have a whole filled with them and they’d feature in every single one of my music videos.

One, I was raised in Nottingham but moved to London in my early twenties. I’d fronted bands and played shows for years all over the world so going solo was terrifying at first but inevitable!

Two, I write some very fat choruses. Sometimes too fat – maybe I should put them on a diet or something…

Three, my favourite place in the whole world to be is on stage. There’s no better way release than live music and I can promise you the Drew Thomas live show is the best representation of what I do

Four, every lyric and story in my songs is from a real moment or experience. However good, bad or sad it sounds.

Five, I write for other artists too! If you follow me online, you might see me show some of the latest tunes I’ve penned.

I’m lucky to have a mother who was a big music fan so always supported any form of music lesson or interest I had in it. I think I wrote my first song when I was about 12 – it was a song with only two chords with lyrics about not liking people changing. Hilariously, my song topics haven’t changed very much… haha!

One questions nobody has asked me, surprisingly is one thing I’d do differently if I could give young me some advice…

I’d tell him to embrace who he is as a person and just focus on making the most honest music he could. It’s so easy to get hung up on social media stats and what other people think of you. I have lost sight before of what’s most important and forgotten how important it is to love your own journey.