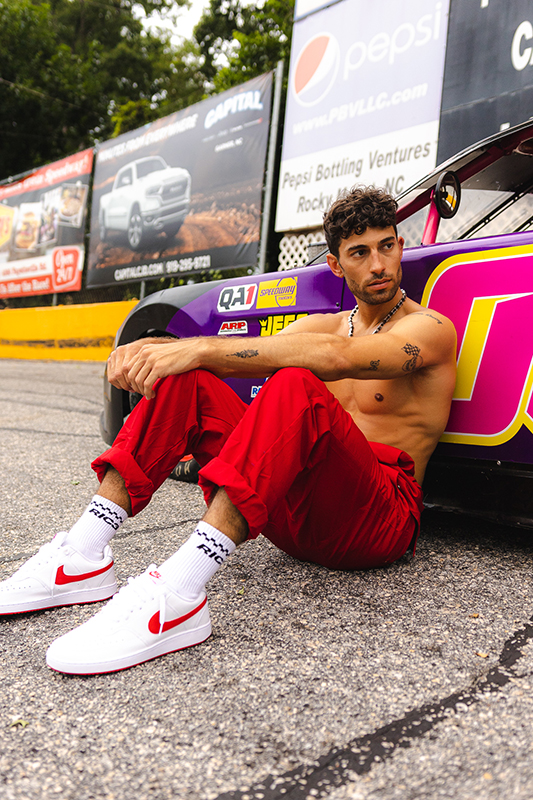 Hello, thank you for your time, please introduce yourself in a few words!

My real name is Ryan, but I go by the artist name, WONDR. I’m a Pop/R&B artist from Raleigh, NC, currently living in Charleston, SC.

I have a brand new song and music video out now titled ‘Rich.’ It is about being rich in love, not necessarily in money or material things. Lyrically, I use the same play on words to express how my current relationship has me feeling. The song was produced by a friend from Morocco, Soff, who found me on Twitter a few years back. The only other song Soff produced was my first release and first song to hit a million streams on Spotify, ‘White Aston.’ The music video for ‘Rich’ was shot on a race track in Raleigh, NC by a videographer friend of mine, Roland DesLauriers. The video was a 4-year manifestation that happened in 4 days. What I mean by that is, I’ve been wanting to film a music video at a race track since I started WONDR, but never really had a way to. I’ve been a huge fan of racing since I was little and it has evolved as a part of my brand and image as a Pop/R&B artist, so this was something of a dream for me.

My artist name is spelled WONDR not Wondr. It’s a classic mixup so I figured this was the perfect time to address it, lol.

I love motorsports. NASCAR and Formula 1 are my go to’s when it comes to racing.

I have been modeling for a few years now. What’s funny is I’ll do a shoot for a cool brand or company, but then no one tells me if they will use the photos and where they will use them. I find out I’m on a box in Target when someone DM’s me and asks, “Is this you?“ It’s a good laugh every time something like that happens. I’ve had a lot of cool experiences modeling but what’s really been great is that it’s started to tie into my music career. Recently I’ve had opportunities to work with brands like Perry Ellis America and The Messi Store as the artist WONDR.

Family (and food) are everything to me

This is definitely a tough question to answer. Racing is such a big part of who I am so that definitely has created a big impression on my music and music making process. It’s rugged, takes a few bumps and scratches to get to the front, but always finds a way to finish strong. We’re not the highest funded race team at the track, but we always find a way to produce the best competing quality content and sound with the least amount of resources.

A lot of my musical inspiration comes from past and present relationships with girls, aside from the few songs here and there. I’m passionate about my relationships and I learn so much from the people I date and women I associate with. I’ve hurt and I’ve been hurt, more than once, and I feel like I could write a million songs about one girl and no one would be the exact same. The complexity in just trying to understand another person is a wallet full of ideas when I start writing a new song. In a sense, it’s therapy for me. It helps me look objectively at my relationships and try to understand them from the others perspective.

I always think of the movie Napoleon Dynamite when I hear this kind of question, lol. I’d love to say I have nunchuck skills and am pretty good with a bow staff, but I haven’t quite ventured into those yet. I do think I’m a pretty decent racer though when it comes to go-karting, if you want to call that a special talent. I love being behind the wheel and pushing myself and the machine to the max.

A pretty intense mix of nerves and excitement. I’m still working on ways to find a happy medium so I can breathe while I’m up there, haha. I get too nervous, I lose breath quickly and my mouth will get dry to the point of no return. I’ve fought through any problems in the past because after the first one or two songs I completely forget why I’m nervous. The music becomes a comfort and I get sucked into the epicness of what it means to be performing your own music for a crowd of fans as a job. It’s awesome is what I’m really trying to say

My dad gifted me my first guitar in 2nd grade, and I’ve been hooked on making music ever since. I started out listening to Country, Rock, and Pop artists like Alan Jackson, Aerosmith, and Michael Jackson because that was the music my parents played around the house and in the car. Then, around 4th grade, thanks to an older sister and brother, I began listening to Hip-hop/Rap artists like 50 Cent, Petey Pablo, Ludacris, and most of the early 2000’s artists blowing up at the time. My dad even started blaring Jock Jams on car rides. While rap was becoming my go-to music genre, I continued to play rock and even formed a short-lived Muse cover band in high school playing the drums. Things transitioned in college and Rap/R&B began to consume my life. I started a rap duo my junior year, but that only lasted a year or so. To make a long story short, I ended up realizing a solo career in music was what I needed. Ditching the band and the duo, switching from rap to making more contemporary R&B music, I finally became the independent artist known as WONDR. I’ve been grinding for the past four years, developing my sound, brand, and catalog of music. I consider my music to be Pop/R&B, but my early influences of classic rock and country still stand out in different songs and videos.

Would you ever try and race NASCAR or even a Formula Class? That answer is 100% yes