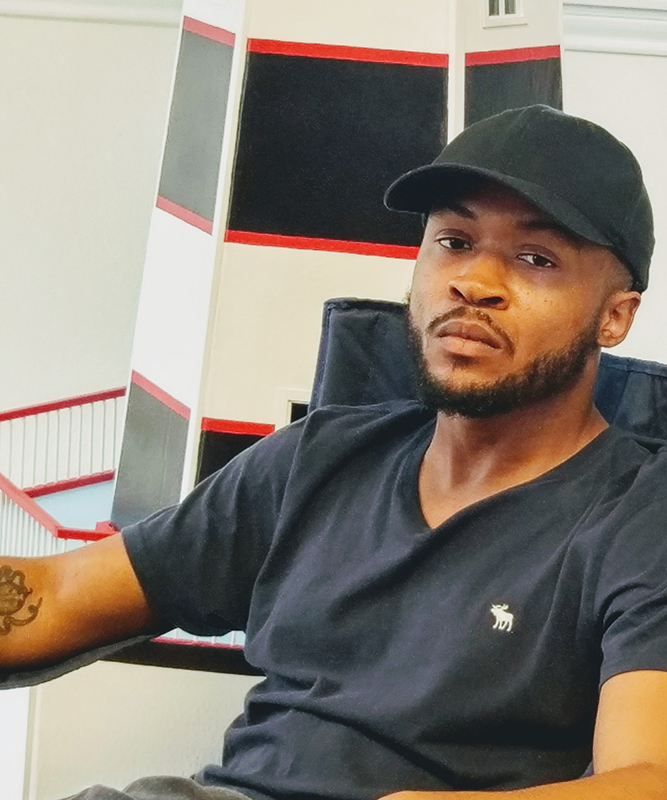 I go by Tea Sea and I’m happy that people are interested in what I have to say.

My newest single “Vanish” just released this past November and it’ll definitely be the last song I release for 2021. I’ve been working on my new album since October 2020 and I’m still not done with it over a year later. I’ve got another new song currently baking in the oven, but I’m not revealing anything about it until next year. I will say that the seven singles I’ve released so far in that year’s time are just the tip of the iceberg—there are plenty more tricks up my sleeve that I haven’t revealed yet!

I’m not the best at explaining my artistry to people. The thematic structure of my songs is usually pretty moody and darkly introspective, but I don’t think I’ve ever made a song that was outright nihilistic or anything. My lyrics usually come out very poetic because that’s all I really know: I actually have a handful of poems published in a couple of Harbinger Asylum paperback anthologies. I’m naturally introverted, but I’m also a little distrustful due to some lonelier periods in my past. I’m no stranger to dealing with depression, but it’s not the core of my identity. The main reason why I’m relentlessly pursuing this music career is that I want people who are also struggling with sadness and anger to know that there is a way out.

Now that I think about, I do wear a lot of Nike streetwear. Where I grew up, you would get clowned for wearing anything else, really. What’s cool is that there’s also actual mythology behind the goddess of victory herself. So many successful athletes are associated with Nike’s clothes that they are almost the embodiments of these mythological heroes/heroines themselves in modern reality. I get my love of Greek mythology from my father but I’ve always been drawn the rugged aesthetic of the Air Force 1 sneakers in particular. Plus, my feet are huge and they’re one of the few shoes that genuinely feel comfortable for everyday wear.

I started writing songs specifically when I was sixteen years old and it was mainly in an attempt to get a girlfriend. I’m more than just a “love song” guy, but women have always been a primary muse for my music, even if the song isn’t directly about a failed relationship. As an artist, I’m behooved to never just stick to one topic, so I’ll gladly pull some creativity from sources like books, movies and video games also. At the end of the day, I mainly hope my audience can see my songs as flashlights and lifeboats in dark skies and troubled waters. Everybody is quite literally going through some hardship, especially with this pandemic going around, so vulnerability is especially appreciated during such a tumultuous time in our human history.

I mean, besides playing video games for two decades, not really. I used to want to be a game designer as a child, even going so far as to study the C++ programming language in order to learn how to do it. The problems are that it’s so time-consuming and you’ll still need to build a team to get anything else worthwhile accomplished because the code is just the beginning. I definitely prefer playing games to making them, but I’m honestly fonder of older, 3D games because modern titles just feel soulless compared to what I grew up with, honestly. I used to also draw cartoons when I was younger, but nowadays it’ll take me two hours just to draw a semi-acceptable face… it’s pitiful, really.

…everyone’s looking at you. To be quite honest, I’ve never really been one to suffer from stage fright or anything. My teachers had me participating in school plays in elementary school and in high school I performed at my talent show and on the street with a local poetry group. I even sometimes had to speak at team startup meetings for one of my 9-to-5s. I don’t really get the nerves on stage, even when I’ve messed up a bar on a song before. No matter what, I’ve always had a fun experience and it’s humbling to think that people are willing to spend their time, energy and money to come see me perform. I think that’s the most transcendental and beautiful thing about all of this and I really do appreciate it.

Writing and artistry seems to be some kind of genetic trait that my mother passed down to me. She’s an author and an artist who gives no quarter when it comes to going after what she wants, but she’s also very gentle and compassionate as well. Both of my parents would tell me stories as a child and I was always encouraged to read as many books as I possibly could. As for the melodies themselves, more often than not, they will just pop into my head randomly. Once that miraculously happens, I’ll usually hum them out to see if they’ll actually lead to some worthwhile ideas before fully committing to any one of them, however. I didn’t really think I had much of a singing voice until very recently; most of my practice honestly comes from singing in the car with my windows up. Also, I generally prefer to hear the instrumental first before I even think about jotting a lyric down.

I’ve been a fan of blue for the longest time—it’s a color that’s mellow and tranquil, but also quite sad and self-reflective.