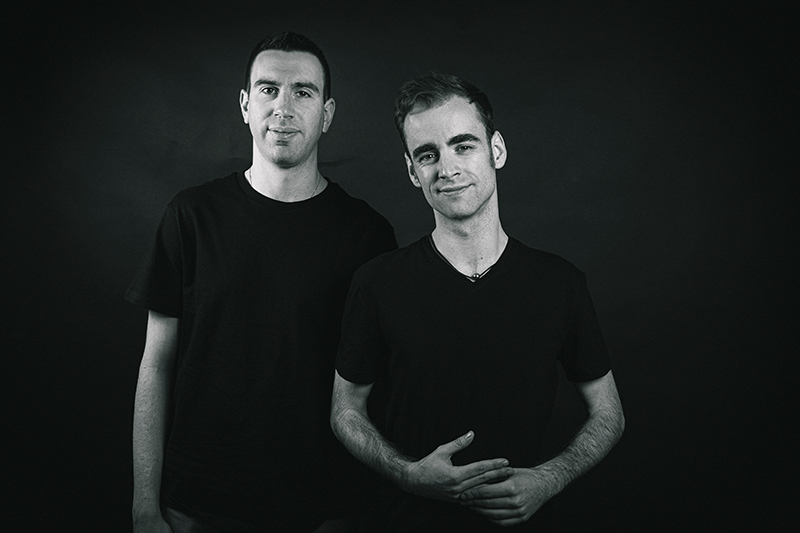 Hello, thank you for your time, how would you describe PINEO & LOEB in a few words

Please give us an update about your new single „Good Vibe Feeling“ and any other future projects you are currently working on (next releases, tour, etc).

Good Vibe Feeling was a big project for us and we’re so happy with how it’s come together!  We were really excited to get the features we got in FUEG & Ellie Sax which paired well with the sample from Canadian Disco artist, Estiban.  We’ve released two music videos for it featuring dancers you might not normally see in music videos just having a good time and putting that out in the world really makes us happy.  The song and videos are being received well thus far and we are seeing the jump rope community start to gravitate towards it.  We’re excited to see what comes of that as they can get really creative with the jump choreography/moves.

We have a new single coming before the end of the year and then more singles coming in Q1 of 2022 that will culminate in our next original project releasing later in 2022.  We’ll be touring across Canada again for Winter 21/22 and then taking our show to the United States for the first time in 2022; we’re so excited for it!

Name 5 things we all should know about you as a duo/artists?

House and Funk are the backbones of our sound but we’ve released tons of music in different styles/genres, from Chillout Hip-Hop to Drum & Bass.

We’ve released loads of unofficial remixes from classic to Top 40 that are available on our SoundCloud, including a full mixtape of Classic Rock remixes called ‘Morning Maniac Music’.

We were two separate artists with individual sounds and styles that were brought together by fate and have morphed that into our current sound which is a real synergy of our different, complimentary energies.

We regularly perform DJ sets on our Twitch page that are always a blast. www.twitch.tv/pineoandloeb

80’s new wave style alongside easy going Hawaiian shirt vibes. It’s said that Hawaiian shirts go in and out of style every other year so we also like to mix it up!

Our process is different every time but quite often one of us will start off an idea, pass it to the other and we both put our individual spin on it.  We both use different DAW’s (Ableton and Logic) but sometimes work on a project at the same time, one person manning the computer and the other shouting out ideas.  Having someone to bounce ideas off is amazing; when we’re both really excited about an idea we know it’s special.

If you could change anything about the music industry, what would it be?

There are so many absolutely incredible artists flying under the radar that the world should know about. We love collaborating with and combining different artists that might not normally work together and showcasing their unique talents. Better pay per stream would be nice as well!

Tell us more about your songs? Main topics or messages you want to send?

Universal love, acceptance and positive vibes are what we’re all about! Music can unite people of all backgrounds and that truly inspires us. We really try to connect with people of all music tastes, age groups, demographics etc. We worked with the classic rockers Glass Tiger on one release and the young pop star Olivia O’brien on the next because at the end of the day it’s just great music, the differences and divisions are just in our mind.

A question you’d like to answer, but never been asked in an interview before?

Desert Island Discs: Imagine you could only listen to a few albums for the rest of your life. We think about this a lot, it’s a very difficult question because music’s staying power varies so much. Daft Punk’s “Discovery” seems to get better with every listen so that’s a must for us. Prince’s “Purple Rain”, Michael Jackson’s “Thriller” are the same and I’d also have to pick Dr Dre’s “The Chronic: 2001” because it is absolutely packed with great songs and is very long!