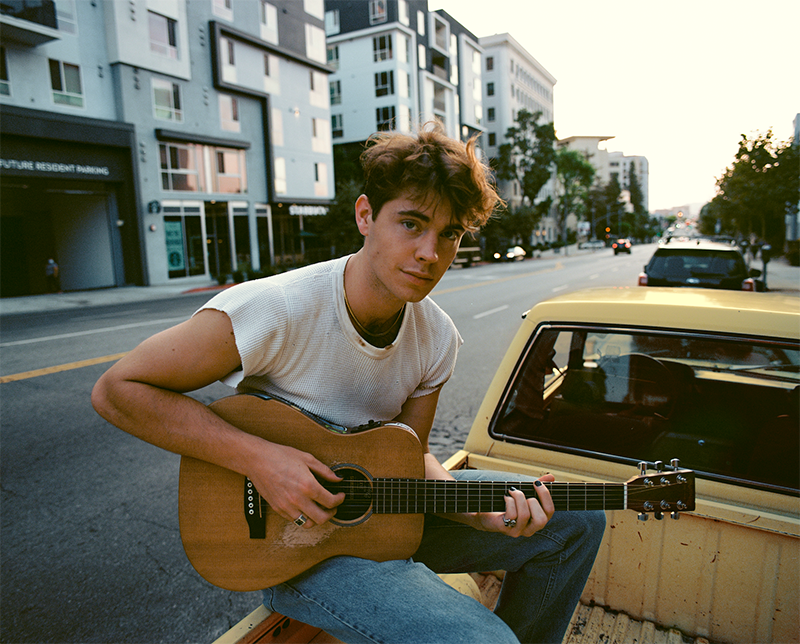 Hey im Gabe James, a singer songwriter originally from Colorado, and i’ve lived in LA for 2 years now. I’ve been playing guitar since I was 7, and also have taught myself how to play bass and piano.

I just put out a brand new EP called, CITY OF LOST ANGELS and it’s my favorite piece of work i’ve put out thus far. It’s a project of 4 songs meant to document the story of me having just moved to LA, from the small town in Colorado where I grew up and being thrown into adulthood.

I couldn’t be more excited  to announce I will be beginning my first ever tour February 15, with my close friend Ryan Woods! We will be playing New York, Atlanta, Chicago, Houston, Dallas, San Francisco, and LA and I hope to see whoever is reading this there at one of the shows! You can purchase tickets on my website gabexjames.com or ticketmaster.com.

-I have been playing guitar since I was 7 and love more intricate guitar playing similar to John Mayer.

-I write great music for heartbroken people to listen to as well as couples who have just fallen in love. (kind of a juxtaposition haha).

-Ive written and produced all of my songs from my bedroom.

-I can learn to play any song i listen to by ear.

I would like to describe my music as alternative pop, but I feel like I’m still transitioning out of the singer songwriter genre I previously felt I was part of. But the music I write now and plan to release is much more alternative.

Almost all of the songs I’ve put out thus far have been ones I wrote back in high – school. I feel like that influenced a lot of what I wrote to be love songs or songs about heartbreak. I didn’t have a lot more to write about yet since I had not experienced life long enough lol.

I’m really good at balancing things on one finger. (kinda hard to explain but like any long object I can balance on my finger for forever. I’m not sure if it’s special, maybe everyone can do that lol.

It feels like having a voice and a moment where everything you say and do is taken in by the crowd. It feels really powerful and important. I love performing and connecting with the people around me!

I started playing a cheap old guitar my aunt had gifted me when I was 7 years sold and I would carry it around with me everywhere; camping, all over the yard, and wherever we went. So my mom decided to get me lessons for a few years and then I just never really stopped playing!

I started singing towards the end of Middle School when I first heard Ed Sheeran on the radio. I was obsessed with him and he made me feel like I could be an artist and sing. So I would go on long walks away from home(sometimes with my dog) and just sing for hours! I never let anyone hear me sing until the beginning of highschool because I was so shy.

I tried to start writing songs around the same time I started singing in 7th grade. I kept it very secret as well though until highschool when my first song I ever put out gained some traction on soundcloud! It was called Possibilities.

Outside of music I love to stay active and workout frequently! I run every morning and workout every night, and also love hiking and snowboarding when I’m in Colorado!

I’m also a huge nerd and love playing video games though I rarely ever feel like I have time to do that anymore lol.