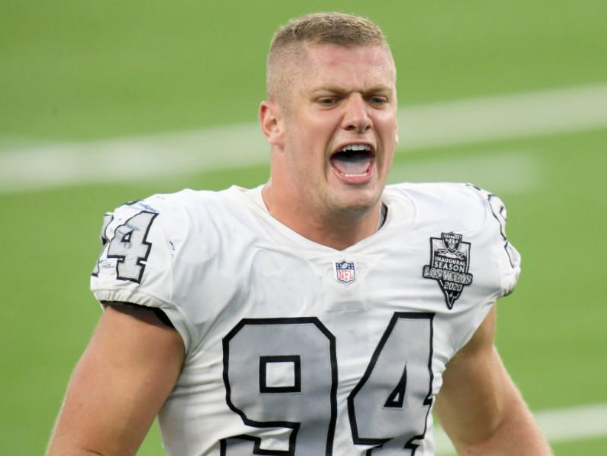 „Carl Nassib“ by Harry How/Getty is licensed under CC BY 3.0

Has Carl Nassib opened a door in men’s sport that will enable other athletes to feel more open about their sexuality? In an Instagram video he posted, Nassib, a defensive end with the NFL’s Las Vegas Raiders, recently revealed to the world that he was gay. He’s the first active NFL player to ever admit he was a homosexual.

Is he the only gay player currently playing in the NFL? The odds are certainly against that being the case. A recent survey conducted by Statista.com showed that among Americans, 6.4 percent of females and 4.9 percent of males identified themselves as part of the LGBT community.

Taking into account the active 53-player rosters of the 32 NFL teams, that works out to 1,696 players. Of that total, when you do that math, 4.9 percent works out to at least 83 players. Does that mean that at least 83 NFL players are gay? No, but it guarantees that there’s most certainly more who are homosexual than Nassib. And the data also shows that by hiding their sexuality from their teammates, those players are putting their health and well-being at significantly more risk both from a psychological and physical standpoint when compared to others on the team.

According to a study conducted by the Yale School of Public Health, an estimated 83 percent of those who identify as lesbian, gay or bisexual hide their sexual orientation for all, or at least the majority of their lives.

“Concealment takes its toll through the stress of hiding and also because it can keep sexual minorities away from each other and from adequate public health attention,” said John Pachankis, Ph.D., associate professor at the Yale School of Public Health. “But in many places around the world, concealment and its stressors are safer than the alternative.”

Pachankis co-authored the study with Richard Bränström, an associate professor at the Karolinska Institutet in Sweden and research affiliate at Yale.

Pachankis indicated that ​​their study showed that concealing one’s sexual orientation can lead to significant mental and physical health issues, increased healthcare costs and a dampening of the public visibility necessary for advancing equal rights.

Even though the Statista study revealed that 72 percent of Americans were accepting of homosexuality, the stigma of being gay still feels real. Data shows that members of the LBGT community are more likely to suffer from a mental illness. Many gays who responded to the study admitted that they were keeping their sexuality hidden for fear that it would impact their chance of progression within their workplace. 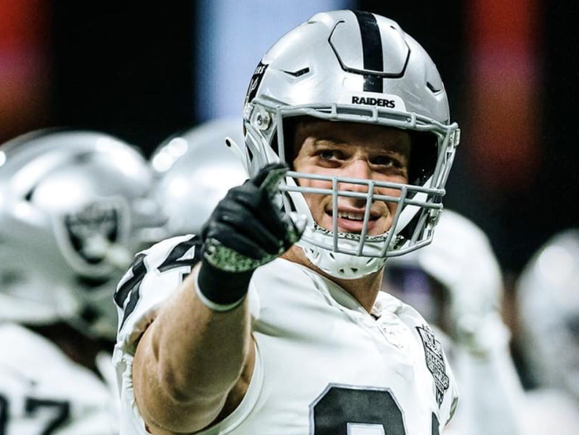 „Carl Nassib“ by raiders.com is licensed under CC BY 3.0

Nassib’s public admission, while courageous, still makes him the exception rather than the rule. While in some sports such as figure skating, male athletes are more open about admitting their sexual preferences, in the macho world of the big four of North American sport – the NFL, NBA, MLB and NHL – such honesty isn’t forthcoming and still doesn’t feel like it would be welcomed or encouraged.

It’s much easier to come out as gay when someone competes in an individual sport, as opposed to a team game where players are sharing locker rooms and showers.

College football player Michael Sam came out just prior to the 2014 NFL Draft. He ended up being drafted in the seventh round and was cut in training camp. He never played a game in the NFL and many wondered whether this admission of his sexuality got Sam blacklisted from the league.

The likelihood of the former in male sports remains remote and the chance of the latter ever happening is almost zero.

„He has no idea how many people he’s affecting – in a good way,“ former Dallas Cowboys linebacker Jon Rohrer told USA Today of Nassib’s admission. Rohrer came out as gay following his NFL career and today is part of a same-sex couple.

„The NFL needed this, to get past the milestone. In the long run, the world we live in needs more guys like (Nassib) who are open and brave. It really does help for anyone in the country who is currently closeted or faces homophobia.“