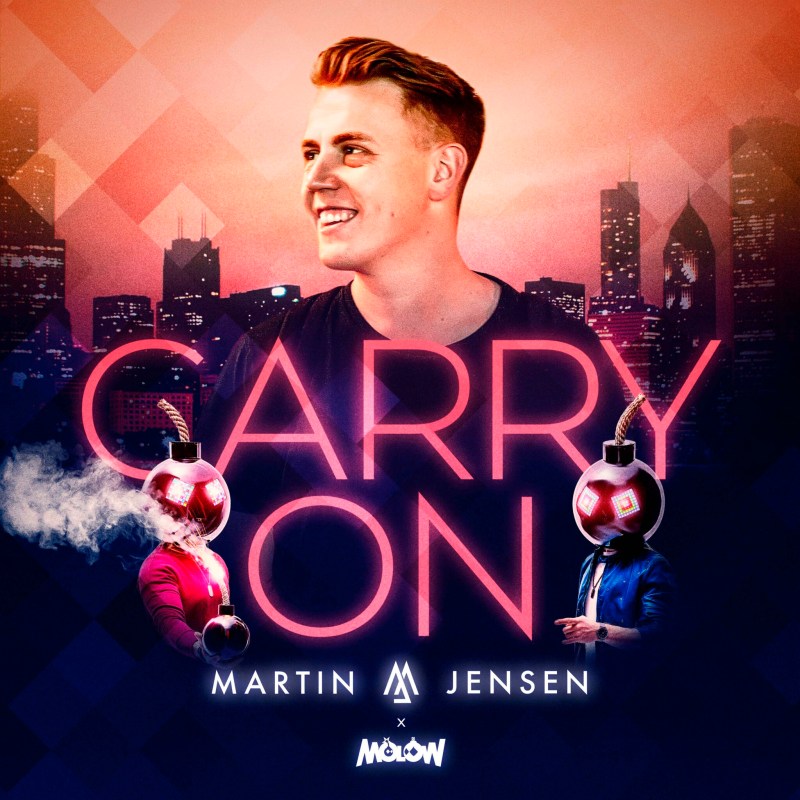 Following on from his insatiable selection of releases that have hit the upper echelons of the scene – take the multi-million streamed ‘Solo Dance’, collaborations with James Arthur and The Vamps, or lending his remixing hand to the likes of Katy Perry – Martin Jensen has crossed over as one of the most exciting acts in dance-pop in recent years. Now, joined by exclusive One Seven Music artists and mysterious masked rising duo MOLOW, that have already hit Top 5 in the official charts of Switzerland with their sizzling release ‘Wildest Love’, they get set to propel their production prowess even higher with the irresistible and distinguishable talents of ‘Carry On’.

Enlisting lyrical toplines that levitate around the listener’s brain, the track’s subtle waves of beats and revolving melodies marry a trio of tropical, spacious and even deep house come the bridge, making for a track that is as infectious as it is uplifting. “Sometimes I wish I wasn’t honest…” the vocal trails in with vulnerability, before spiralling into a brooding, oscillating anthem on the strength of solo navigation and turning into finding joy alone.

With MOLOW already taking their speaker-crushing sounds to performing in renowned clubs such as Asia’s Playhouse, FParty, Space, One Party Club and hosting a particularly spellbinding show at Guangzhou’s Catwalk Club – a DJ Mag Top 100 club – Martin has also been teasing the crowd-pleaser across his recent headline sets everywhere from The US, to Europe and beyond. Speaking on the release, Martin said “It’s been great to work with the MOLOW guys ever since I first caught their high-energy and passion for making crowds ecstatic, I’m excited to release ‘Carry On’ and introduce them to my fans – I hope everyone enjoys it as much as we did creating it!”, with MOLOW echoing on “To have the opportunity to jump in the studio with Martin and bring our different sounds together was so much fun! Being able to learn from such a praised artist and deliver some crazy fusions of our sounds was all we wanted to get the dancers moving – get ready to ‘Carry On’!”!

It’s the house-driven dose of positivity needed to get through the winter months from two acts at the most exciting points in their careers yet; make sure you get your hands on ‘Carry On’ out now via One Seven Music!