Julius Wilder, born in Norway and raised in Denmark, is transcending the partition between producer and artist by embarking upon his new journey as a solo-artist.

Julius‘ debut single „Lovebird“ embraces both his roots in neo-soul and his passion for creating fierce and modern pop.

My name is Julius Wilder. I’m a lover. I make music. And I like to think that my jokes are funny.

Well we just released the single and the music video for Lovebird, which has been an absolute whirlwind. It was my first time releasing anything as a solo artist, and it’s been insane – but a good insane! The entire process so far has made me stoked about getting back into the studio and finishing the other tracks I’m working on, which you won’t have to wait too long to hear ☺
Yes! We’re playing our first gig at SPOT festival in Aarhus, Denmark this spring. I always say that my music is meant to be heard live, so I’m really looking forward to playing the new songs with my band. We’ve been playing together since we were kids, so performing on these bigger stages is such a crazy cool feeling I don’t think we’ll ever get used to.

1. I started playing the drums when I was 6 in my farmhouse barn attic.

2. I went to a music college in Denmark (Sankt Anne) and played drums in a fusion jazz trio for years – one of those guys is still in my band.

3. I’m a perfectionist – sometimes to a fault.

4. One of my favorite songs of all time is Both Sides Now by Joni Mitchell. It makes me cry every time.

5. I always create melodies first, then the lyrics follow.

2020 is the year that my life’s passion is officially being introduced to the world, so it’s a really important time for me. I’ve always played music, but this is different. I write my lyrics and co-produce my tracks, so everything is so personal, which is a bit scary and vulnerable. But I want to embrace this space of vulnerability and continue to make music that’s real. I also love including those closest to me in the process. My fiancé, Janelle Ortiz, played my love interest in the Lovebird music video – back when she was a teenager she was an actress and worked for Disney but left the industry to pursue her PhD. Having her come back into the entertainment world for me, and being able to film together, was such a beautiful memory. I proposed to her days before the shoot, so filming in Spain was like a little engagement honeymoon with a little work and a lot of play.

5. Do you have bad habits? A guilty pleasure you can’t seem to quit?

I love cracking people’s toes. It’s so satisfying! My guilty pleasure is overfilling my tracks with cheesy 80s chords – they just feel so good! And chocolate…and by chocolate I mean all things sugar.

I love to cook. My dad spent some time in Italy when he was in his twenties and learned how to cook while there, which he passed down to me. I also love taking apart and fixing electronics, especially computers. I actually built my first computer when I was 10.

Being on stage makes me feel completely at ease and in the moment. I love the thrill of working under pressure and the excitement of reading the vibes from the audience and building a relationship with them.

8. Must Have – and No-Go in your Wardrobe! – Favorite Fashion Brand and Fragrance?

Must have – Converse! I probably have over 50 pairs and I love being able to pick the perfect pair for the outfit I’m wearing and the mood I’m in. My favorite pair is probably the custom 1970s Hi Dokuro Snake’s – they’re black with these very artistically drawn skulls and snakes in white, pastel blues and pinks – I love them so much.

(Photo of shoes from photo shoot in Joshua Tree) 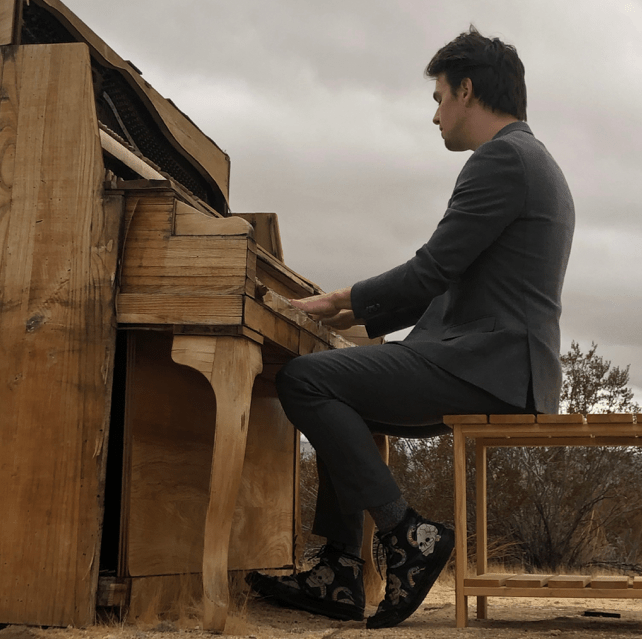 My fiancé would say the only no-go in my wardrobe is my pair of women’s skintight white Levi jeans, but I love them too much to let them go.

What was the first instrument that you ever played?
The recorder and the violin. My first public performance was playing the violin at my brother’s wedding when I was 12. The ceremony was in the middle of a meadow and I had to wear a full linen suit. I was so nervous that I turned bright red the second I started playing, but they’re still married today so I guess I did ok.